A short 2019 retrospective..
In January London Savate competed simultaneously in two capital cities – Paris and Budapest – with wins and great performances in both, including a signature Combat victory for Jon. February heralded our final class at LSBU after 2 years, to be replaced by Beormund Centre as our single site from March, which served as the training platform for the Helsinki Open 2019. April brought a new London Savate online store, with a student dashboard for tracking classes, credits, memberships, and gradings. May saw the British Championships and no fewer than 4 Champions returning to London. In June our showpiece event, the London Savate International open, was held for the 3rd time, taking in over 60 athletes from around the world and setting an admirably high standard of Savate. From July, Jon started to offer specialised training in Combat – full contact – at weekends. National team selection and training began in August, with two London Savate fighters representing GB. In September we proudly celebrated our 15 year anniversary and attended the second Brighton Savate Open. On 11-12 October the European Championships were contested in Genoa, with both London fighters taking podium places, and one official and one supporter travelling from London Savate. November’s Irish Open welcomed the biggest London team yet – with 9 fighters, 2 coaches and 1 supporter. Finally, in December we were able to confirm the addition of new early evening classes from next year, meaning the next generation of London Savate beginners benefit from a wider, better equipped, and more experienced club to join in 2020. 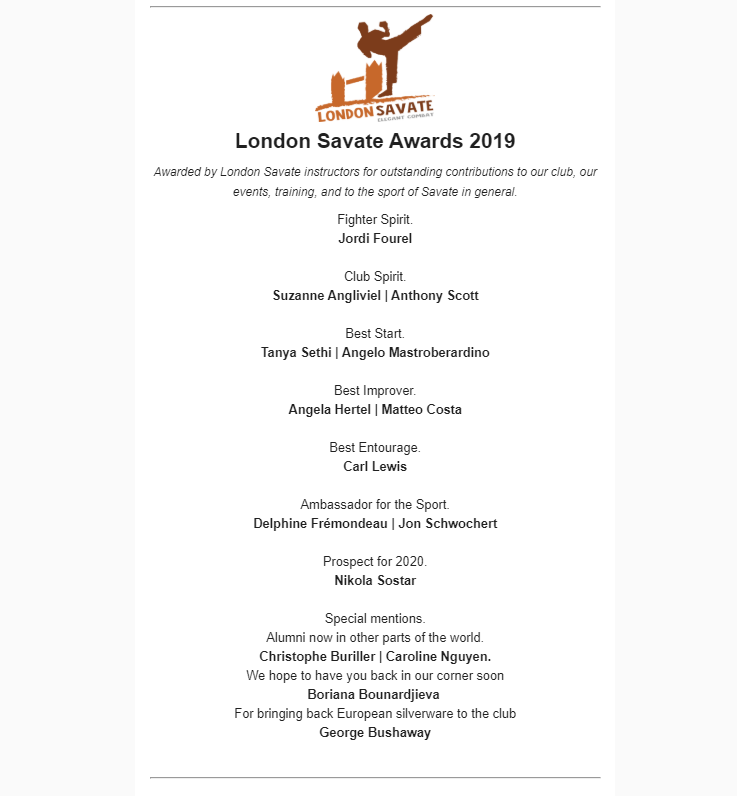