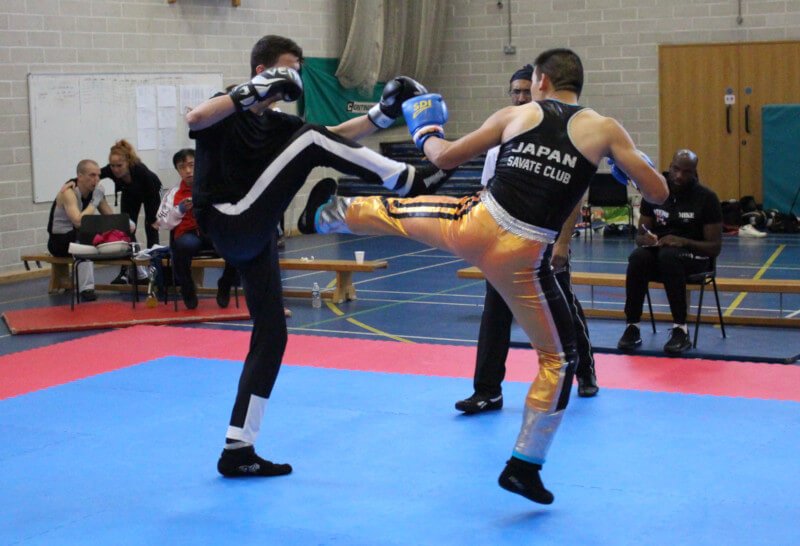 Fencing with the Feet

Savate kicks, unlike those in kickboxing, Thai boxing or MMA, are delivered with the boot. It is a shoe fighting art and students learn to use each part of the shoe as a weapon. More emphasis is placed on kicks than punches in Savate and several rules in competition ensure fighters are, all else being equal, rewarded more for kicking than punching technique. Savate kicks can only strike with the shoe. Shins and knees are forbidden. The trajectory is also important and certain trajectories are not allowed.

Literally ‘Whip’ kick. The kicking action is made around the knee joint. Striking with: toes or top of the shoe, foot extended. The final trajectory must be lateral. (Never swung forwards).

Literally to ‘drive away’. Stamping using a piston action and hitting at full extension, using the heel to keep an opponent at distance.
Lateral: hips sideways on.
Frontal: hips front facing.

Reverse kick. The reverse arc of the fouetté from outside-in, striking with sole or blade of the shoe.
Lateral: hips sideways on.
Frontal: hips front facing.

Literally low strike (sweep). Either striking forwards or outside-to-inside. Can be used to upend an opponent’s. Striking with: inside blade of the shoe, below the knee of the adversary.