Savate Boxe-Française is a unique ring fighting art fusing French kicking with English boxing. It is an agile modern sport practised by men and women of all ages around the world.

What does ‘Savate’ mean?

‘Savate’ means literally an old shoe or boot in middle French. Savate kicks use the boot effectively – some with the heel, some the toe, some the blade or side of the shoe. The word ‘Savate’ has its etymological root in ‘sabot’, from where the word ‘sabotage’ comes. The term Savate now embraces a set of arts – or associated disciplines – around the French art of fighting with the shoe.

Yes and no. Savate is a type of kickboxing, for it uses punches and kicks in rapid, competitive movements. ‘Kickboxing’, however, usually refers to a set of styles which grew out of Japanese kickboxing in the 1950s and American-style kickboxing from 1970s onwards. These sports are governed by WAKO, WKA, or ISKA, to name a few major organisations, whereas Savate is regulated independently by FISav (the Fédération Internationale de Savate). Savate is a kick-punch sport with its own rules and style and is at least 100 years older than what is otherwise often called ‘kickboxing’. 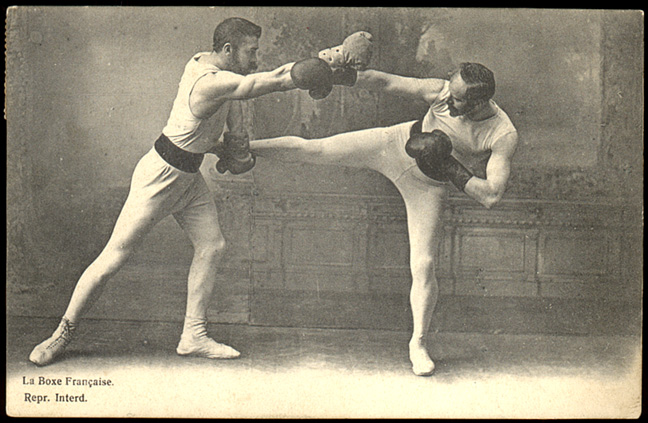 Savate traces its history back to the 1800s. At the time a Southern French slipper fighting form known as Chausson or jeu marseillais practised high kicking. Savate was the name of the northern French street fighting style. It is easy to imagine neighbourly rivalry, with the English – who settled duels by boxing with the hands – regarding foot fighting unseemly, and the French seeing fist-fighting as graceless or uncouth. Of course the two came together, which is no surprise for two countries which were at war with each other in the early part of the century. Savate’s foundation myth is that French fighter Charles Lecour was beaten by a young English boxer named Owen Swift, although doubts are cast on this story. Nonetheless it was Lecour who formalised the art of Boxe-Française Savate in 1838, to which date the founding of Savate is normally ceded.

Savate was a demonstration sport in the 1924 Paris Olympics. Many practitioners were likely lost owing to the French military casualties of the two World Wars of the first half of the 20th century. From the 1970s onwards, a renewed interest in martial arts in the west has swelled the ranks of Savate practitioners. From the year 2000, international Savate competitions have spread the sport around the world and the Federation International (FISav) has member countries worldwide. Savate is a FUSU World University sport and is on the path to Olympic recognition.

What are the values of Savate?

Savate is a punch-kick sport incorporating several types of kick – fouetté, chassé, revers, coup de pied bas (read more about Savate kicks) – and punches from standard English boxing – direct, uppercut, crochet (read more about Savate punches). The art is longer range than most stand-up striking sports, with foot flexion made possible by wearing a boot. Shins and knees are illegal in Savate, as is an upwards swung kick. The result is a graceful, fast, technical style favouring technique and invention over brawling.

Savate punching technique is practically identical to the sport of boxing, itself codified properly since the the Marquis of Queensbury (1865-67) rules were made. This makes Savate Anglo-French. Savate kicks must strike with the shoe (see above) and in this regard it differs from Thai Boxing and kickboxing, which use the shin and swing the leg in a different manner.

Mixed Martial Arts (MMA) is in vogue and requires effective stand-up technique as part of its game. The heel strike in Savate’s Chassé – literally meaning ‘to push/get away’ – is often in evidence. Several professional MMA fighters train with Savate coaches (an observation of this author).

Savate and JKD (Jeet Kune Do)

Bruce Lee studied in Savate when writing about Jeet Kune Do. There are many JKD clubs with a Savate basis or a Savate syllabus. The precise and often analytical techniques of Savate fit naturally with the conceptual style of JKD training.

‘Savate’ refers to a family of Associated Disciplines

is a ring sport using gloves and boots, in which punches and kicks are used to win either by KO or by judges’ decision. In Assaut fighters score points with touches, and all force excluded. In Combat full contact is used to seek to win by KO.

is a stick-fighting competitive art using many of the body movements of Savate.

is a workout co-ordinated to music using Savate punches and kicks, but no contact between participants.